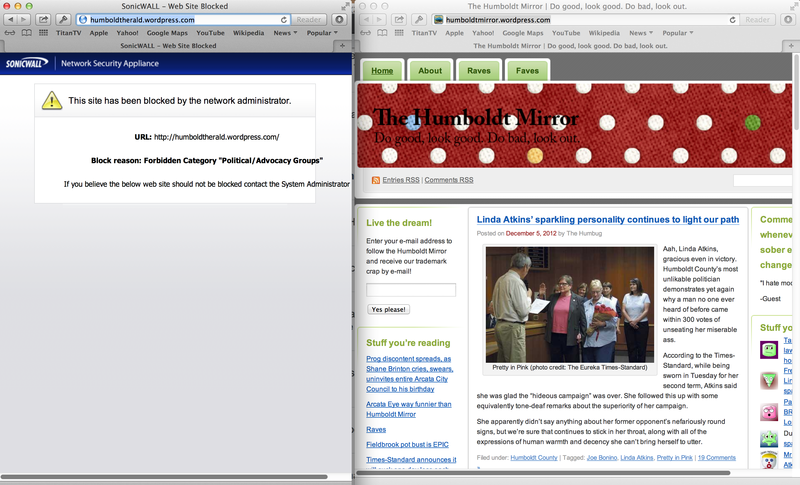 I took my car to Mid City Motor World (between Arcata and Eureka) this morning to have the oil changed and some other minor maintenance completed.  I have been buying Honda's from Mid City, and having my cars serviced at Mid City, for many many years and I highly recommend their sales and service. I feel that they are a very customer-oriented business.

They also offer a lot of nice amenities for customers waiting in the lobby. There is real coffee, ground from fresh beans, real cream for the coffee, fresh bagels with cream cheese (they need a toaster), tables next to wall outlets for you to set up your laptop, and free guest WIFI.  The service writers all recognize me and they are all very professional.  They even offer to wash your car for you before they give it back!

However, this morning I had a rude shock.  I decided to wait for my car to be done, instead of using their free shuttle service and coming back later.  I set up my computer, hooked up to their Guest WiFi, and proceeded to try and read some of the local political blogs.  One pair of blogs I occasionally read (although sometimes I don't know why) is the Humboldt Herald and the Humboldt Mirror.  For those that don't frequent the cage-lining pages of these two political blogs, they are the opposite of each other,  The Herald is what I would consider strongly left of center, and the Mirror is way out in right field.  (The comment sections of each of these blogs are a petri dish of toxic waste.  It also looks like they both may be dying a slow death with no new posts for three months for the Mirror, and no posts in the last month for the Herald.)

Imagine my surprise when I opened a window for each of these two blogs, and found out that the network administrator was censoring/blocking the Humboldt Herald, but not the Humboldt Mirror.  The exact message read:

I did what the message said, and asked the receptionist if I could talk to the System Administrator for Mid City.  A nice gentleman named "Scott" came out and explained that their system uses a blocking system from Sonicwall, their router provider, and that he just checks "categories" of blocking, the specifics of deciding what individual site(s) to block is coming from information provided by Sonicwall (Sonicwall was recently bought by Dell Computer).

Scott thinks that the Herald may have generated more visibility on the internet and has become listed as a political site within the Sonicwall database, where the Mirror has not generated that much coverage or interest and therefore is probably simply "not rated" which will not trigger any blocks.  I asked Scott to check it out for himself and perhaps even consider not using the "political/advocacy groups" category for blocking guest access, since the Sonicwall blocking list is not filtering this category in a fair and impartial way.

I will report back next time I am at Mid City and let you know if the situation is still the same.

Update #1
I received an update from the sys admin at Mid City, indicating that they had readjusted the firewall blocks to allow both the Mirror and the Herald through their firewall, and has submitted both to Sonicwall for re-rating.  I have not been back to test it, but I wanted to give them credit for great customer service and followthrough.  Thanks Mid City!
Below is the text of the message I received from the Sys Admin at Mid City: