Ryan Burns of the Lost Coast Outpost posted an article yesterday afternoon that resonates with me.

The Internet is abuzz today with news that the U.S. Patent Office has canceled several trademarks belonging to, as John Oliver calls it, “the-football-team-for-some-reason-not-yet-formerly-known-as the Washington Redskins.” The patent office ruled that the term “redskins” is “disparaging to Native Americans.”

The move comes — coincidentally it would seem — at the crest of a wave of public backlash. Last month 50 U.S. senators wrote a letter urging team owner Daniel Snyder to change the name, and President Obama recently suggested the same thing. (Snyder has vowed repeatedly that he’ll never do so.)

Anyway, all this hubbub got us thinking about a certain auto repair shop near Costco in Eureka.

Honest Engine has been in business since our nation’s bicentennial, and lest you miss the pun, its logo features an “injun” in a feather headdress — an apparent riff on the old Indian Head penny.

Is that racist? In our experience, opinions locally range from totally blasé (“Meh, I never even thought about it.”) to fairly incredulous (“How can they still have that name?!”).

I encourage you to jump over to the Lost Coast Outpost and read Ryan's entire article.
Ryan sent me a private message via Twitter asking me my opinion before he posted his piece.  I replied, but unfortunately my reply was sent hours after he had posted his article.  (hell hath no fury like an editor's deadlines scorned?).
I decided to publicly post my response here.  I truly appreciate Ryan's article, discourse on this issue is long overdue.

The local business name, coupled with the logo is insulting to say the least.  The entire concept of the pun behind that business name belongs in the history books chronicling the dark ages of this country, next to blackface and minstrel shows.  (Do a google image search on "Negrobilia advertising"). Would any decent person approve of Negrobilia style advertising in this day and age?  Why is it ok when it is an Indian?
While I am not Indian, my wife and 8yr old son are Indian.  I am tired of having to try and explain why society allows the inherent racism of the Washington R-word team name splashed all over national media to my son, and I am saddened by local businesses using cultural appropriation and racist implications in their pun-based name as a dark ages advertising gimmick.
Greg Gehr 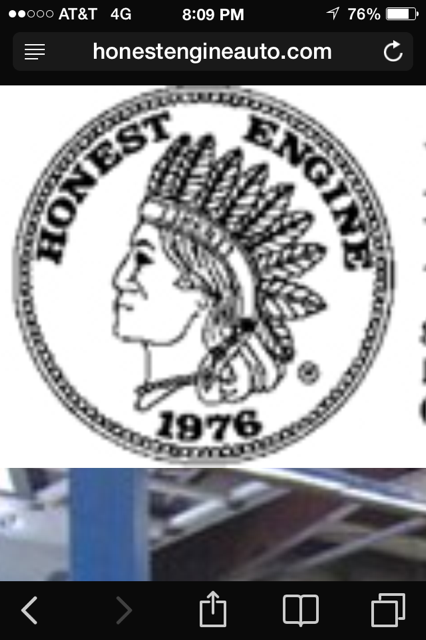 Update #1 6/20/14
Ryan from the Lost Coast Outpost has done an update on the issue, including a letter from the owner of the business, with a welcome and respectful response.  Sometimes things do get better!
http://lostcoastoutpost.com/2014/jun/20/honest-engine-owner-explains-business-name/